Elder assistance for a bedridden loved one… 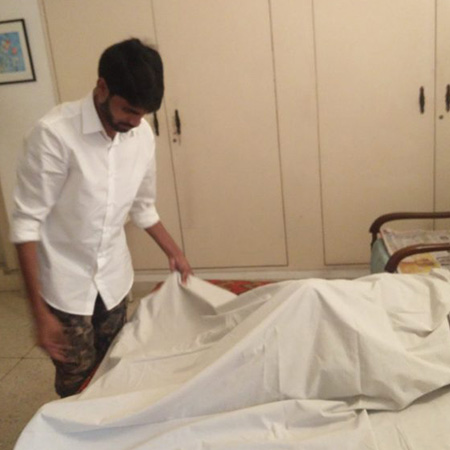 After the patriarch of the family suffered a stroke in 2003, the Khanna family got him admitted to the Gangaram Hospital in the city. He was in hospital for the next 10 days. The stroke left him with a permanent limp. Things took a turn for the worse two years later when he fell off his bed and had to undergo a hip replacement surgery. Post-surgery, he had to use a walker and also needed support when moving around.   Things gradually worsened and he became completely bedridden in January 2017. The family approached Life Circle for professional help.

Khanna’s wife recollects while narrating the events, “Saheb (she refers to her husband) was very fond of travelling; he took us to so many places, London, New York, Brazil, Hong Kong, to name a few. We used to go on cruises, visited so many hill stations.” She gets a little upset and says, “My daughter tells her children, grandpa took us here, he took us there… it’s a pity he can’t take the grandchildren anywhere.” 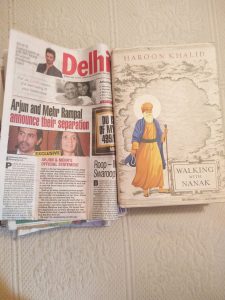 Love for reading: Newspapers and book beside him

Khanna’s wife became his primary caregiver for the first five years. When his health worsened and it became necessary for him to have a catheter, the Khanna family hired the services of a certified nursing assistant from Life Circle. Santosh, Khanna’s current home attendant, works closely under the supervision of a nurse manager. He moves the patient at regular intervals to prevent the formation of bed sores, makes sure the bed sheet is clean and changes it immediately after it gets soiled. He makes the patient comfortable and ensures his wellbeing at all times.

It has helped that the Khannas are voracious readers and keep themselves occupied with newspapers and books. They love watching television especially ‘The Kapil Sharma Show’ which is a favourite with Khanna. At times, they engage themselves in a game of cards or simply get into lengthy conversations that transport them into a different world.

Khanna has only words of praise for the home attendant, “ Santosh is very nice, jadoo ke haath hain iske (he has magical hands)!!”

About the home attendant

Santosh hails from a small village in Bihar. He has four elder brothers and a sister. All are married and have children. Santosh’s father lives with his elder brother who has a family to look after, his brother is not able to extend any financial help to his parents. Santosh saves around 4000 rupees every month from his earnings and credits it into his father’s account. He is happy that his father is able to buy medicines and the basic grocery for the household.

Santosh likes the caregiving profession because he gets to serve the elderly. He says he gets a lot to learn and is content with the job.

The benefits of elder assistance

Having an elderly person at home who is bedridden is a huge responsibility and it can be overwhelming, both physically and emotionally. The most important thing when caring for a bedridden elderly person is to be caring and understanding. Home-based elderly care for the bedridden is demanding and needs round-the-clock care. It is in the best interests of a senior citizen especially one who is bedridden that the services of a certified nursing assistant are sought.

*Names have been changed upon request.

Aparajita, has a background in dentistry and has done a Masters in Public health from the EHESP- French school of public health. She has worked at organizations such as WHO(Geneva), URC- Eco(Paris), HandsOn Suburban Chicago & NWSRA(Chicago). Now she is working at Life Circle as the care coordination officer. She believes it’s best when career and passion come together. Her vision to bring some grass- roots level change through organized efforts gives her the drive to work. In her spare time, she loves moving around the city, exploring new places and making memories.